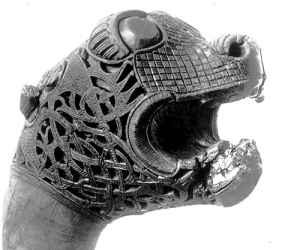 The entry for the year 800 in the Annales Regni Francorum tells us that Charlemagne built a fleet on the Gallic (North) Sea which was infested with pirates. Though not explicitly stated these ‘pirates’ are undoubtedly the Northmen whose raids on Western Europe are first recorded in the Anglo-Saxon Chronicle of 789, some four years before the infamous sack of Lindisfarne in 793.

Charlemagne’s fleet construction was complemented by further defensive measures to combat the pillaging of the Northmen, with strongpoints and coastguard stations established at ports and river mouths. These measures appear to have proved successful based on the few incidences of attack by the Northmen during his reign and the early years of his successor, Louis the Pious, prior to the Danish attack on Frisia and the first of many sackings of the emporium, Dorestad, in 834.

Danish incursions into West Frankish territory begin in 810 with the campaign of King Godefrid in Frisia, though this incursion is unlikely to have been a profit seeking plundering raid, but rather an act of foreign policy relating to Godefrid’s ambitions to expand Danish royal power and his control over neighbouring lands and peoples. Godefrid’s death in 810 at the hands of one his housecarls saw the start of decades of intermittent civil war in Denmark between rival Danish royal claimants. Louis, presumably wishing to have a sympathetic power on his northeastern borders, supported Harald Klak who was unable to permanently secure the throne against the forces of Godefrid’s sons but did become co-ruler of Denmark from 812-814 and again from 819-827.

In 826 Harald was baptised at St Albans, Mainz, and Louis presented him with the county of Rüstingen in Frisia as a refuge if he found himself in danger. Given the context and location of the fief it would appear that Louis was attempting to secure his Frisian territory against depredation by the Danes by co-opting Harald into his service, and Harald’s expulsion from the Danish kingdom in 827 was presumably a setback to Louis’ plans.

Harald’s expulsion left Horik I as sole king of Denmark and the consolidation of Danish royal power in parallel with the onset of two decades of civil war in Francia during the last years of Louis’ reign are arguably key factors in the sudden onset and escalation of Danish attacks on Francia from 834 when Frisia was laid waste and Dorestad ‘destroyed’. Dorestad was to be sacked six more times in 835, 836, 837, 844, 857, and 863.

In 841 Lothair II (Louis’ grandson) granted Walcheren and the neighbouring region to Harald as a benefice, while Harald’s relation, Rorik, appears to have received Dorestad as a benefice from Lothair I (eldest son of Louis) prior to Louis’ death in 840. Though the sources are unclear Harald and Rorik appear to have fallen under disgrace circa 844 and resorted to raiding Frisia on their own behalf. In 846 Dorestad and Betuwe were seized and tribute exacted from Frisia. In 850 Rorik attacked and seized Dorestad and laid waste to Frisia and Betuwe. In response Lothair, unable to force the issue militarily, received Rorik back into fealty on condition that he would faithfully perform the duties of a count in relation to government and resist the attacks of the Danes in Frisia.

This tactic seems to have largely paid off for the Carolingians. During the periods under which Frisia fell under the rule of Harald and Rorik, the number of attacks declined sharply in comparison to those that occurred in other parts of West Francia and in England. It is notable that when attacks occurred they largely coincided with periods in which Rorik had no control over Frisia, for example during his two absences in the 850s when he unsuccessfully sought to gain royal power in Denmark. His value to the Carolingian’s is attested by the fact that Louis the Pious, Lothair I, Lothair II, Charles the Bald, and Louis the German all gave Rorik control of parts or all of Frisia between 841 and c. 882.

Co-option of the Danes was not always a successful tactic. During the last years of Rorik’s life the Dane Godfrid, having left England after the defeat of the Great Heathen Army by Alfred at Ethandun in 878, ravaged Flanders in 880, and attacked the cities of Maastricht, Liege, Stavelot, Prüm, Cologne, and Koblenz in 882. Charles the Fat besieged Godfrid at the Danish camp in Asselt in Frisia and, depending on the sources, was either deceived by treacherous advisers, or his courage failed him. Whichever was the case, Godfrid agreed to be baptised, was granted Frisia and the other lands previously held by Rorik, and married to Gisela, daughter of Lothair II.

Godfrid’s fealty proved short-lived. In 885 he was accused of treachery and plotting with Hugh, Duke of Alsace, his brother-in-law, the illegitimate son of Lothair II, who wished to sieze the Kingdom of Lotharingia, his father’s former realm. In an ill-tempered meeting with Henry of Franconia and other Saxon and Frisian nobles Godfrid and his followers were killed. Hugh was blinded and ended his days in the monastery at Prüm. Godfrid was the last of the Carolingian appointed Danish rulers of Frisia. He was succeeded by the Frisian, Gerolf of Holland, who may well have been heavily involved in the conspiracy himself. Isolated Danish raids on Frisia continued for over another century, the last attacks taking place in Tiel and Utrecht in 1006 and 1007.