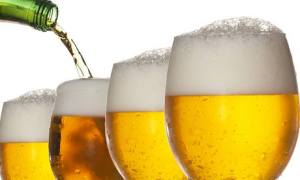 To lager drinkers Plzeň is, or should be, a spiritual home as the birthplace of the pilsner style of pale lager which dominates the modern beer market. Brewing in Plzeň is recorded as far back as 1295 but it was in 1839 that city authorities founded the Burger-Brauerei, later the Měšťanský pivovar Plzeň (Citizen’s Brewery). In 1842, under the direction of Bavarian brewer Josef Groll (1813-1887) the brewery presented its first batch of pilsner to an appreciative public. Such was its success and popularity that pilsner brewing rapidly spread throughout Europe. In 1859 ‘Pilsner Bier’ was registered as a brand name at the Chamber of Commerce and Trade in Plzeň. In 1898 the Plzeňský Prazdroj trademark was created, more widely known by its German form of Pilsner Urquell.

Today Pilsner Urquell continues to be brewed in Plzeň at the Plzeňský Prazdroj brewery where it is lagered in sandstone cellars that have been used by brewers as far back as the fourteenth century. It  is matured in oak casks made by the only team of coopers that remain in Central Europe. The team is led by Josef Hruza, who has been working as a cooper at Plzeňský Prazdroj for forty years.  The Czechs have a fine and long history of brewing. Hops were grown from at least the mid-ninth century, the Zatec brewery claims its antecessor’s were brewing in 1004, and České Budějovice, home of Budweiser (the decent Czech brew, not that insipid gnat’s water from St. Louis, Missouri), was exporting beer to Bavaria in the 1100’s. Today the Czechs hold the distinction of being the world’s greatest beer drinkers with an annual per capita consumption of 132 litres or 232 Imperial pints.

Here,
With my beer
I sit,
While golden moments flit:
Alas!
They pass
Unheeded by:
And, as they fly,
I,
Being dry,
Sit, idly sipping here
My beer.
O, finer far
Than fame, or riches, are
The graceful smoke-wreaths of this free cigar!

Why
Should I
Weep, wail, or sigh?
What if luck has passed me by?
What if my hopes are dead,—
My pleasures fled?
Have I not still
My fill
Of right good cheer,—
Cigars and beer?

Go, whining youth,
Forsooth!
Go, weep and wail,
Sigh and grow pale,
Weave melancholy rhymes
On the old times,
Whose joys like shadowy ghosts appear,—
But leave me to my beer!
Gold is dross,—
Love is loss,—
So, if I gulp my sorrows down,
Or see them drown
In foamy draughts of old nut-brown,
Then do I wear the crown,
Without the cross!