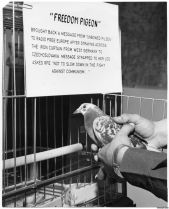 In 1954 a racing pigeon named Lena lost her sense of direction during a flight from Munich to her home in Klautzenbach and landed in Plzeň. She was found by a local pigeon fancier who attached a message addressed to Radio Free Europe to her leg and released her. On her return to her loft her owner found the message and notified Radio Free Europe, who broadcast the message:

“We plead with you not to slow down in the fight against Communist aggression, because Communism must be destroyed. We beg for a speedy liberation from the power of the Kremlin and the establishment of a United States of Europe. We always listen to your broadcasts. They present a completely true picture of life behind the Iron Curtain. We would like you to tell us how we can combat Bolshevism and the tyrannical dictatorship existing here. We are taking every opportunity to work against the regime and do everything in our power to sabotage it.”

In August 1954 “Leaping Lena”, AKA, “The Pigeon who Crashed the Iron Curtain”, was flown to New York as part of a fund raising campaign by Radio Free Europe where she was met by an honour guard of four hero pigeons of the Second World War from The U.S. Army Signal Corps Breeding and Training Center, Fort Monmouth, and fifteen photographers who greeted her as a VIP, “Very Important Pigeon”.  One thousand pigeons were released by American pigeon fanciers in Lena’s honour, one of which carried a copy of the message to President Eisenhower, and one with a copy of the message to Henry Ford II, president of The Crusade for Freedom, the financers of Radio Free Europe.

Lena’s fate is sadly unknown. After three weeks in quarantine at Fort Monmouth she was taken on a press tour as part of the 1954-55 Crusade for Freedom campaign. According to newspaper reports one of the Fort Monmouth pigeons was destined to be her mate but with the closure of the Pigeon Breeding and Training Branch on May 1, 1957, Lena disappeared from history. It is possible she was donated to a zoo.