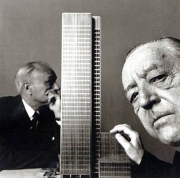 Ludwig Mies van der Rohe (1886-1969) along with Walter Gropius, Le Corbusier, Richard Neustra, Philip Johnson, and J. J. P. Oud, was one of the leading lights of the International Style in architecture. Characterised by rectilinear forms and making use of glass, steel, and reinforced concrete the International Style favours blank spaces in place of applied ornamentation and decoration and makes use of cantilever construction to create large open interior spaces. In addition to the commercial and industrial designs that still dominate urban landscapes today van der Rohe designed a number of private homes, one of the most famous being the Villa Tugenhadt.

In 1928 The newly-wed Jewish couple Fritz and Grete Tugendhat commissioned van der Rohe to design a home for them on land in Brno that they had received as a wedding gift from Grete’s parents. Construction began in 1929 by the construction firm of Artur and Mořic Eisler and the Tugenhadt’s

moved into the house in December 1930. In 1938 the Tugendhat’s fled Czechoslovakia following Nazi Germany’s annexation of the Sudetenland. After their departure the house was confiscated by the Gestapo  and used as accommodation and office space.  In 1945 Marshal Malinovsky used it as quarters and stables for his cavalry regiment. Following the Second World War the house was used as a private dancing school and as a rehabilitation centre for children with spine defects.

From 1963 the house was left in neglect but in 1981 the city of Brno, now owners of the building, embarked on a restoration project that was completed in 1985. In 2001 it was declared a UNESCO World Heritage Site. Additional restoration work took place between 2010 and 2012 and the house is now open to the public.