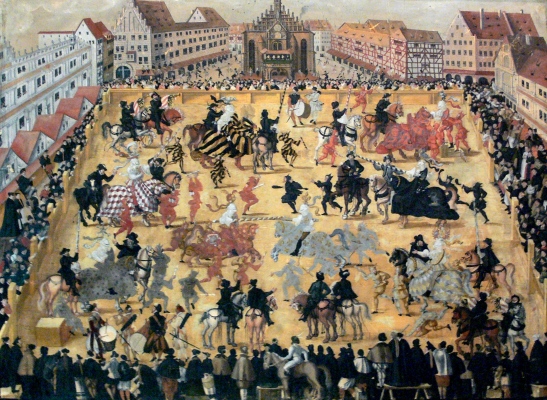 While reading around the subject of The Reformation in Germany during the early 16th Century I came across this painting by Jost Amman (1539-1591) in Martin Kitchen’s, The Cambridge Illustrated History of Germany. The Caption accompanying the illustration explains that the painting portrays “patrician youths chasing apprentices in Nuremberg on 3 March 1560, on the occasion of the annual ‘Apprentice-Sticking’ (Gesellen-Stechen).”[1]

I was immediately intrigued. What was ‘Apprentice-Sticking’? What did it involve? What did it represent to the Nurembergers of  1560? My immediate assumption was that this was a painting that captured a typical aspect of the tradition of carnival, one where the boundaries that normally separate social groups are temporarily blurred or even inverted. A quick web search revealed very little, other than that unless I became fluent in German very, very quickly, I wasn’t going to get very far.

Luckily, I discovered an article from The Metropolitan Museum Journal by Helmut Nickel and Dirk H. Breiding, respectively Curator Emeritus and Assistant Curator at the Department of Arms and Armour of the Metropolitan Museum of Art, New York.[2] In the article they describe a late 16th to mid-17th Century German Turnierbuch, or tournament book, that is part of the Museum’s collection  and which contains 126 full-page illustrations recording tournaments and parades held in Nuremberg. Among these illustrations were four that depicted eight young patricians that attended the Gesellenstechen of 1561: Moritz Fürer von Haimendorf, Wilhelm Trainer, Christoph Scheurl von Defersdorf, Philipp Sieder, Matthes Löffelholz von Kolberg, Philip Geuder von Heroldsberg, Balthasar Gugel von Diepoltsdorf, and Andreas Schmidmaier von Schwarzenbruck. All accompanied by attendants dressed as jesters.[3]

Whereas The Cambridge Illustrated History had described the event as “Apprentice-Sticking”, Nickel and Breiding render Gesellenstechen as “Bachelors’ Jousts”.[4] Gesellenstechen, it appears, were prestigious tournaments involving the bachelor sons of Nuremberg’s leading families that were held in the Hauptmarkt at Nuremberg.[5] Amman’s painting and the illustrations in the Turnierbuch record the last ever Gesellenstechen to be held in that location on March 3, 1561, the Monday before Lent began on Ash Wednesday. The day saw fifty-six jousts and festivities ended in the evening with a dance held in the city hall.[6]

Amman’s painting includes all eight of the contestants depicted in the Turnierbuch. The winner of the first prize was Moritz Fürer,[7] who appears at centre right in the lists. In front of him one of his attendants is charging towards another attendant belonging to Christoph Scheurl, who came third on the day.[8] The attendants respectively hold what appear to be a club and a baton. One assumes they are participating in a mock joust for the entertainment of the crowd. In their role as jesters for the day they may also be gently mocking the patricians they serve through parody.

When we connect the evidence of the Metropolitan Museum’s Turnierbuch with Amman’s painting one wonders why The Cambridge Illustrated History of Germany describes the scene in the way it does. Perhaps it’s the result of a too literal translation of, “Gesellen-Stechen”. The word, gesellen, does after all mean ‘journeymen’ and stechen conveys the meaning of ‘sticking’ in the sense of delivering the thrust of a spear or lance, as in the English term ‘pig-sticking’. Interpreting gesellenstechen as ‘apprentice-sticking’ is entirely logical, until we remember that the German for ‘bachelors’ is junggesellen. It’s only conjecture on my part, I am relying solely on Nickel and Breidel for my information, I don’t speak German and I’m relying on a German-English dictionary for my translation, but it appears that what we see in gesellenstechen is a contraction of junggesellen rather than the German word for ‘apprentice’. Given the evidence of Amman’s painting and the Turnierbuch, a ‘Bachelors’ Joust’ makes much more sense.[9]

In the end I find that I can’t answer my questions as to what ‘Apprentice-Sticking’ was and what it involved because it seems there was no annual festival in which patrician youths chased apprentices around the market square. Instead we find an annual joust that took place during the last days of carnival just before the solemn rites of Easter began. It was clearly a popular affair as the crowd surrounding the lists and the onlookers who have climbed to the roofs of the colonnades to gain a better view attest. But for all its popularity it was also elitist. When the jousting was over only those families considered worthy enough to be included in the city Dance Statute of 1521 were invited to the dance at city hall.[10] In that regard, though the world is a now a very different place, not much has changed.

A casual encounter with an image and a line of text while pursuing an entirely unrelated line of enquiry led me down a side path. In the process I learned something new and discovered the fantastic, and what’s more free at the point of use, Metropolitan Museum Journal. I’m also left with new unanswered questions. Why did the Gesellenstechen not take place in the Hauptmarkt after 1561? When did they originate, and why? When did they end, and why? What was their function within society?

A book published in Germany in 1765 may give me the answers I need. It’s main title is Nürnbergisches Schönbart-Buch und Gesellenstechen, “Nuremberg Nice Beard Book and Bachelor’s Joust” … Nice Beard! What’s that about? Is that what Schönbart really means? Why is there a book devoted to them in Nuremberg? Was it an annual competition too? What made a beard ‘nice’? Another casual encounter, another little journey of discovery to be made.

* I include this image under the principle of fair use