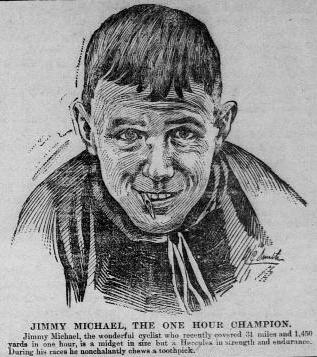 While 1898 was to see Jimmy continue to train as a jockey his ambition to race in silks was not to be fully realised for another year. There was still money to be made and a reputation to uphold racing bikes on the track. On New Year’s Day he met the youngster, Edouard Taylor, at Madison Square Garden in a 25 mile race, beating the Frenchman by 8 laps in a time of 51 minutes and 54 seconds. [1] World records continued to tumble with Jimmy smashing J. W. Stocks’ 1897 10 mile record by 27 seconds on June 27 at Boston with a time of 17 minutes and 20 seconds.[2]

Meanwhile Tom Linton had returned to the States, declaring he would not return home until a race had been arranged between Jimmy and himself.[3] They finally met in New York in July at the Manhattan Beach track for a 20 mile race in front of 15,000 people. In the fourth mile Jimmy punctured and instead of getting a rapid wheel change opted to ride slowly off the track to a storm of hisses from the crowd. By the time he had returned Linton had gained a mile. With the result inevitable the only remaining interest for the crowd was whether Linton would break the record. A feat he achieved by setting a new world record for 20 miles of 35 minutes and 18 seconds.[4] Jimmy immediately challenged Linton to a match over 25 miles and a week later in front of another packed house at Manhattan Beach Jimmy gained his revenge, beating Linton over a 25 mile race which Jimmy won by about 170 yards after Linton lost his pacemakers in the final mile.[5]

Behind his success on the track was a regular training regime. A typical day would begin with a stroll before breakfast followed by a run which take him to the track. There he would ride a set distance at an average pace of 2 minutes per mile and after a rub-down would return to the hotel for a light lunch. The routine would be repeated in the afternoon with another run and further training on the track before supper. After his meal had been digested Jimmy would box with his trainer, have a session with dumb-bells, and use a skipping-rope. Another rub-down would follow before he retired to bed for the day.[6] By today’s standards it may seem unscientific but like modern athletes sheer hard work, discipline, and motivation underpinned his efforts.

Jimmy’s private life made headlines in 1899 when the press reported that his wife had successfully sued for divorce in 1899[7]. His marriage to Fanny Lewis, the 17 year old daughter of an Aberaman butcher, had been marked by abandonment, with Jimmy leaving for Europe shortly after the wedding in 1896. During the 3 years the marriage lasted Jimmy appears to only have made an effort to see his wife on a few occasions when he returned to Wales for a break from racing. In 1897 during an interview with the American writer, Edith Sessions Tupper, Jimmy had claimed that he was not married,[8] leading his wife to visit him in the States. Jimmy refused to take Fanny back and filed a petition for divorce with the American courts which he subsequently withdrew in early 1898.[9]

On his return to Wales in November Franny once more sought to see him at his uncle’s house in Aberaman, but left after Jimmy had threatened her with violence, after which Franny had not seen him again. It emerged from the divorce proceedings that when Jimmy had married her they had thought that she would come into her deceased father’s estate, some £10,000 in value, on her 18th birthday. The news that Franny would not inherit until she was 21 was the catalyst for Jimmy to abandon her. Perhaps of greater weight in the judge’s mind when granting the divorce was the testimony of a witness who attested to committing adultery with Jimmy.[10]

Meanwhile Jimmy had finally fulfilled his ambitions to ride as a jockey, appearing professionally for the first time at Torrington, Connecticut, in July 1899 where he won 2 races.[11] Early promise did not translate into as successful a career as he enjoyed on the track, with Jimmy being only moderately successful while on horseback, while his tendency to use cycling terminology by describing stirrups as pedals and reins as handles made American owners wary.[12] Despite announcing his departure from cycling Jimmy was soon back on the track seeking to renew his interrupted career.

The Carmarthen Weekly Reporter’s pronouncement in December 1899 that “Jimmy Michael is a “star” of the past” proved to be hasty.[13] Though he was unable to achieve the same level of dominance he had enjoyed, his return to cycling in America and Europe saw Jimmy continue to win races and set records. In September 1900 at the Woodside Park in Philadelphia he lowered the world record for 25 miles once again, beating the record holder, Johnny Nelson, in a time of 39 minutes and 29 seconds.[14] In November 1901 he beat the German champion, Thaddäus  Robl, at the Parc des Princes, Paris, claiming all records from 20 to 50 kilometres, breaking the world record for 50 kilometres by 2 minutes and 33 seconds in the process.[15] 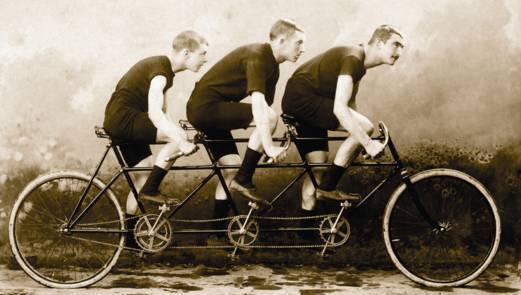 A crash in Berlin in 1902 left Jimmy seriously injured. Evidence suggests that he suffered permanent brain damage as a result. Late November 1904 found Jimmy on the French liner, La Savoie, en route from France to America. On Sunday 27 November he complained to the ship’s surgeon of a splitting headache which he believed to be due to the Berlin accident. After taking a draught prescribed by the surgeon Jimmy joined the dinner party and appeared to be well.

On Monday morning the Swiss cyclist, Jean Gougoltz, who was travelling with Jimmy, heard groans from Jimmy’s cabin and called the surgeon. Jimmy was found delirious and in great pain, the surgeon diagnosing concussion of the brain. Jimmy never regained consciousness, dying at 11 o’clock on Monday 29 November. [16] He was buried at Greenwood Cemetery, Brooklyn in a funeral organised by P. T. Powers, the manager of the six-day race in New York which Jimmy had been travelling to attend.[17] Despite his reputed career earnings in excess of $100,000 Jimmy died nearly penniless. His interest in horse racing had not been limited to his ambition to a jockey. Jimmy was also a gambler, spending much of his money on backing horses and more on buying race horses that proved to be a poor investment.[18]

As with so many professional cyclists the suspicion of drug use hangs over Jimmy’s career. There is no conclusive evidence but his association with ‘Choppy’ Warburton raises questions, as do contemporary reports of cocaine use in cycle racing[19] and as a stimulant for horses.[20] With Jimmy involved in both sports he would at least have been aware of the use of drugs and as his endorsement of Paine’s Celery Compound demonstrates he was certainly willing to consider the use of less contentious stimulants. The adage that you can’t make a race horse out of a donkey may well be true but it is difficult to escape the conclusion that Jimmy probably used drugs during his career. He was certainly blessed with natural talent but with drug use the pressure to at least level the playing field against contemporaries that did use stimulants must have been great.

We will never know for certain whether or not Jimmy did use drugs during his racing career. A superstar of his day, thousands flocked to see him race on tracks in America, France, Germany, Belgium, The Netherlands, England, and Wales. For most of his career he was the man to beat, enjoying great rivalries with other high calibre riders like Frank Starbuck, Bobby Walthour, Lucien Lesna, Eddie McDuffie, J. W. Stocks, Charley Barden, Constant Huret, and Arthur and Tom Linton. He was a multiple record holder at distances from 1 to 100 miles and for the hour, and the first official British professional world champion. Jimmy Michael deserves to be remembered as one of the greatest track cyclists of his era and of all time.

The art of Maxine Dodd