Back in 2005 the British Broadcasting Corporation invited the listeners of its You and Yours programme to vote for their favourite invention. The winner by a country mile was the humble bicycle, crossing the finish line by a whopping margin, with 59 per cent of the votes cast. The second placed transistor (it was radio listeners who were voting after all) gained just 8 per cent of the vote. For the record I was one of those who voted for the bicycle.

Interestingly the bicycle as we know it today, that is, as a pedal operated, rear-wheel drive machine, owes much to Scotland. Indeed it is Scotland that claims the honour of introducing the pedal-driven bicycle to the world, albeit an honour that is contested. The early decades of the Nineteenth Century had seen the invention and growing popularity of the draisine, or hobby-horse as it was colloquially known in the English speaking world, the invention of Baron Karl von Drais allegedly in response to a shortage of horse fodder in Baden, Germany, in the aftermath of the Napoleonic Wars and the series of poor harvests that blighted European agriculture.

At some point in the 1830’s Kirkpatrick Macmillan, a Dumfriesshire blacksmith working for the Duke of Buccleuch at Drumlanrig was apparently so struck by the sight of a hobby-horse that he decided to build his own. Learning to ride led to the realization that propelling it without having to put his feet on the ground would be a vast improvement. By 1839 Macmillan had reputedly built the world’s first pedal-driven bicycle which used connecting rods attached to the pedals to drive the cranks attached to the rear wheel and was soon regularly making the 14 mile journey to Dumfries.

Unfortunately Macmillan never patented or otherwise recorded his invention, muddying the waters and making it difficult to confirm if he was in fact the original inventor of a pedal-driven machine. By 1846 Gavin Dalzell of Lesmahagow was selling a bicycle for £6 or £7 that was also allegedly pedal-driven, and for many years he was regarded as the inventor, despite apparently never laying claim to the invention. To further confuse matters a third Scottish candidate for the invention of the pedal-driven rear drive bicycle appeared in 1869 when Thomas McCall of Kilmarnock built two variants of a rear-wheel drive velocipede.

McCall’s bicycle had the distinction of being the first such design documented, gaining him the distinction of being the inventor. Which brings us back to Macmillan, or at least to his relative James Johnston who in the 1890’s sought to prove that Macmillan and Dumfriesshire were the respective inventor and birthplace of the bicycle. Writing in The Gallovidian in 1899 Johnstone claimed that he had conclusive proofs. Frustratingly these were never produced, or perhaps they never existed, and critics have since claimed that the design was an amalgamation of those of McCall. When we consider that rear-driven velocipedes were also separately patented by John Smith, Benjamin Lawson, Thomas Morse, and Charles Dayton in the United states, by J. Cox in Britain, and by Alphonse Barberon and Joseph Meunier in France, doubt is cast on the Scottish claims to inventing the bicycle.

What is clear is that the need for an Ordinary, or Penny-Farthing, to have a 60 inch diameter front wheel led to the realisation that a drive system that allowed for a smaller driving wheel would be more manageable. As with so many inventions it’s difficult to establish just who had the idea first. In the case of lever-drive systems for bicycles it seems that several people independently arrived at the conclusion that applying the lever and crank principle used in many steam engines of the time would also work for the bicycle. So is the bicycle a Scottish invention? All we can really say is that it is possible that conceptually it was, and that McCall’s velocipedes can stake a strong claim for being the first rear-driven bicycle to actually get off the drawing board and be built.

We’re on safer ground with the Scottish origins of another important component of the modern bicycle, the pneumatic tyre. Until late in the Nineteenth Century tyres were solid, either an iron hoop on a wooden wheel as with the draisine, or the solid vulcanized rubber tyres that made their appearance in the late 1860’s. In 1887 John Boyd Dunlop, originally from Dreghorn in Lanarkshire, was living and working in Belfast where he had a veterinary practice. After his son, John, complained of being jarred while riding his tricycle on the cobbled street, Dunlop constructed a pneumatic tyre which he fixed to a wooden disc and tested against one of his son’s tricycle wheels. The advantage of the pneumatic tyre was immediately obvious. On 23 July, 1888, Dunlop demonstrated his tyres before a group of Belfast businessmen at the Cherryvale sports ground and, meeting with their approval, submitted a patent which was granted on 7 December.

Shortly after, Dunlop went into business with William Harvey Du Cros, President of the Irish Cycling Association, and moved to Dublin to take up the position of technical director. Potential disaster struck when it was revealed that Dunlop had not been the first inventor of the pneumatic tyre. Another Scot, Robert William Thomson of Stonehaven, had patented his own design in France and America in 1847. Fortunately for the Dunlop Rubber Company this was not a crippling blow thanks to Du Cros’ astute policy of buying up competing and compatible patents.

Timing is often crucial for the success of an invention, however ingenious or practical it may be. Thomson’s pneumatic tyre had been an early foray into the use of rubber at a time when the industry was in its infancy and the lack of a thin rubber with the right qualities frustrated development. Advances in rubber manufacture in the intervening years allowed Dunlop Rubber to make a higher quality product that was fit for purpose. Perhaps more significantly the development of the pneumatic tyre for bicycles coincided with the success of John Kemp Starley’s safety bicycle and the subsequent boom in cycling which created a ready market for Dunlop tyres.

Today the beaded-edge Clincher tyre is the world standard for normal use. It owes much of its subsequent development to Charles Kingston Welch’s 1890 patent for wired-on tyres that was snapped up by Dunlop Rubber. The design allows for the relatively simple removal and repair of a damaged tyre. More importantly the pneumatic tyre offers ride comfort as it absorbs the shock and vibration from irregularities in a road’s surface, contributes to lower rolling resistance, gives better traction and safer braking. For me, after the bicycle itself, the ubiquitous tyre is the world’s second greatest invention. 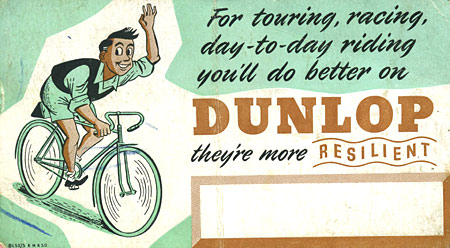