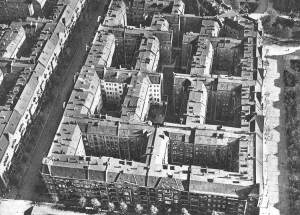 Following German unification in 1871 Berlin was transformed from a provincial city, capital of the Kings of Prussia, to an international, bustling, industrial metropolis in a few short decades. Its population expanded at a dizzying rate, increasing by 402 per cent between 1871 and 1919. By 1920 four million people called Berlin home. Rapid growth required urban residential development and in late 1872 textile factory owner, Jacques Meyer, commissioned the architect Adolf Erich Witting to design apartment houses for a plot of land in the Berlin borough of Wedding. With urban planning relatively unregulated by the civil administration and the driving motive being the maximizing of profit from rental income, the results were the Mietskaserne, the ‘rental barracks’ that soon came to dominate urban housing in Berlin.

Typically they were five stories high and arranged in a series of blocks surrounding a central courtyard with minimum dimensions of 5.3 by 5.3 metres as specified by police regulations. Though large when seen from the exterior Mietskaserne could be subdivided internally into almost any combination of individual rental dwellings depending on the number and size of rooms installed. Witting’s final plan for the Meyer Hof contained 229 units that contained a kitchen and two living rooms, one heated, the other not. A further twenty-eight units offered more rooms and the luxury of a water closet. Those residents not lucky enough to afford the rent on those apartments had to share five toilet houses, each containing eight toilets. A bathhouse with twelve bathrooms provided the residents with washing facilities, and a bakery produced daily bread.[1]

Mietskaserne quickly sprang up in working class areas in response to the need to provide housing for the rapid influx of workers who sought jobs in Berlin’s rapidly expanding industries. Rents were exploitative. At Number 99 Skalitzer Strasse in Kreuzberg the landlord received an annual rent of 23,803 reichsmarks from his tenants; the equivalent of 11.7 per cent of the total cost of building the house.[2] With little other housing available the working classes had little alternative but to move into the Mietskaserne. High rents, in the region of 30 to 35 per cent of total income for families on 900 marks a year, often meant tenants had no alternative but to sublet rooms and beds to supplement their meagre incomes. In many cases these sub-tenants were night lodgers who paid for little more than a place to sleep at night.

Overcrowding was rife. The Meyer Hof housed around 5,000 people, while in 1893 the Berliner Arbeiter-Sanitäts-Kommission found 3,383 housed in the 805 apartments in Sorauer Strasse in Kreuzberg. In 30 per cent of these apartments the tenants were taking in night lodgers. Many tenants raised income by subletting their beds to night shift workers while they themselves were at work during the day. Overcrowding created a significant health risk as well as other social problems which led to initiatives to improve the quality of working class homes. In 1890 Theodore Goecke advocated the construction of housing that could be offered at affordable rents to allow families to rent for sole use. Each dwelling would contain two rooms in the form of a family room with a kitchen stove, a living-cum-bedroom, and a private lavatory. Communal laundries would be housed in the basement and a bathhouse would meet the personal hygiene needs of tenants. Properties were to be built, “simply but solidly, with restrained ornamentation.”[3] An implicit criticism perhaps of the more ostentatious facades of the Mietskaserne that hid the poverty and squalor that lay behind. The Berliner Spar und Bauverein (Berlin Savings and Building Society) was the first institution to begin building a better class of property for Berlin’s working classes. Alfred Messel was commissioned to design workers’ housing at Sickingerstrasse in Moabit which were completed in 1894. Subsequent developments followed the principles of designing housing blocks that allowed fresh air to circulate, adequate sanitation, and access to green spaces.

Despite improvements the condition of many working class Berliners was still one of poverty, of irregular employment with the financial hardships that caused, and of ill health in part resulting from insanitary, overcrowded, and inadequate housing. 430 in every thousand Berliners lived in single room flats. In 1908 the journalist and Reichstag deputy, Albert Südekum, described his visit to the home of an ill woman living in a mass rental block in Wedding. She, her husband, and three children lived in a single room with one bed. The second room was sublet. Husband and wife slept on the bed with the children sleeping on clothing laid out on the floor.[4] It was a far cry from the vision of Werner Sombart when he argued in Das Proletariat that for, “an apartment to be truly fit for humans to live in,” it should contain three rooms for daytime use, a kitchen, and at least two bedrooms to meet the needs of a married couple with three or four children.[5]

Young single working women faced difficulties too, particularly those on low incomes. Efforts to provide them with single homes were often beyond the financial means of those employed in the factories, while the constraints and controls of an institutional approach to single women’s housing in a Berlin where it was, “a quite justified desire for young women occasionally to seek out pleasures that make a return to the home before 10 P.M. impossible,”[6] deterred many single women from seeking rooms in the few tenements that catered for them. One initiative to address the need for suitable accommodation was the foundation of a club for young working girls that provided sleeping quarters as well as a pleasant environment in which to spend their free time. Like many middle class social initiatives it was concerned as much with providing the means for betterment through stimulation and education. Evening hours were filled with regular events that included, “courses in dressmaking and needlework, gymnastics, singing; popular lectures on hygiene, legal and economic questions, and other similar topics. Substantial and nutritious meals were an added inducement to the moral and intellectual development offered by the club.[7]

The issue of overcrowding caused other moral concerns that were expressed by commentators such as Victor Noack who feared that sub-letting to the 52,035 male “roomers” and 81,106 male “night lodgers” recorded in the 1910 Berlin census favoured, “adultery, seduction, and violation,” which the roomer and lodger was all too often, “predisposed to take advantage of.”[8] Whether the “single individuals” liability to skin complaints and related ailments was, “a natural consequence of their unmarried state,” is another question.[9] Marriage, Noack felt, “consolidates, stabilizes, grounds our animal existence.” His own experience of marriage may have been less than he had hoped for when he commented, “fatal though it often proves to all erotic hopes.”[10] Regardless of his obvious lack of faith in the moral probity of the single man with his inclination to, “make the most of any opportunity that comes his way,”[11] Noack’s comments highlight the problems created by boarders threatening the intimacy of the family home: A situation captured by the artist Heinrich Zille in Der spate Schlafsbursche.

Investment in better housing improved the living conditions of many Berliners in the early years of the Twentieth Century but the impact of the First World War and the success of the British blockade of German ports and trade led to rationing and hardship. By the end of the war an estimated 424,000 Germans had died of slow starvation, including thousands of Berliners. Rationing continued into the 1920’s which also saw an inexorable rise in prices and the cost of living. Figures produced by the Allgemeiner Deutscher Gewerkschaftsbund compared the purchasing power of a Berlin carpenter’s wages in 1914 and 1922.[12]

Thus in 1914 the purchase of a kilo of beef required 1 hour, 45 minutes of work, while in 1922 a carpenter in Berlin would have to work nearly three hours to buy the same weight. Just over three hours work were required in 1922 to buy the same weight of eggs as an hour’s work would purchase in 1914. Boots that cost 12.50 marks in 1914 required 14.7 hours work compared to 375 marks and 25 hours of work in 1922. The number of hours of work required to buy a suit of working clothes rose from 58.8 to 100 hours in the same period. Between 1913 and November 1921 the weekly minimum of existence, to include expenditure on food, rent, heat, lighting, and clothing, rose from 16.75 marks to 244 marks for a single man; from 22.30 marks to 378 marks for a childless couple; and from 28.80 marks to 509 marks for a couple with two children.[13] In October 1921 the minimum weekly earnings set for married printers were 385 marks. For machine operators they were 412 marks. National wage rates were fixed for the trade and were topped up with a cost-of-living allowance and a local allowance that varied from 2 to 25 per cent, depending on the locality. In Berlin the cost-of-living bonus in October 1921 was 12 marks a week for a married worker.[14] Life for the working poor was clearly a hand-to-mouth existence.

Yet it was not all unremitting toil and misery. Zille also recorded another aspect of working class life in Berlin. With cramped living conditions that were not conducive to family life working class domesticity took place in public as well as in private. In Im Burgerheim Zille captured his subjects seeking comfort outside the typical home in the pleasures of beer and companionship.  As Goecke explained, the workers spent their evenings in recreation, club activities, and lively political debate. On Sundays they congregated in the Hasenheide and the Berlin Prater.[15] In the summer they went to the beaches on the Spree. Taverns were central to life in the tenement blocks. Wedding boasted 1,307 taverns, one for every 345 inhabitants. In Kreuzberg there was one for every 230 residents.[16] They were a place to escape the monotony and drudgery of work and the overcrowded condition of home. The Weißbier pubs, where families could brew their own coffee and bring their own food, catered for the family trade.[17] And at the centre of Zille’s depictions of the ordinary people of Berlin are the children of the working class who, like children everywhere, made a playground of their environment. 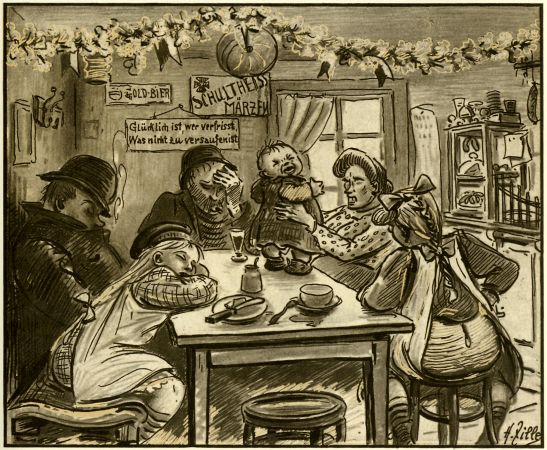 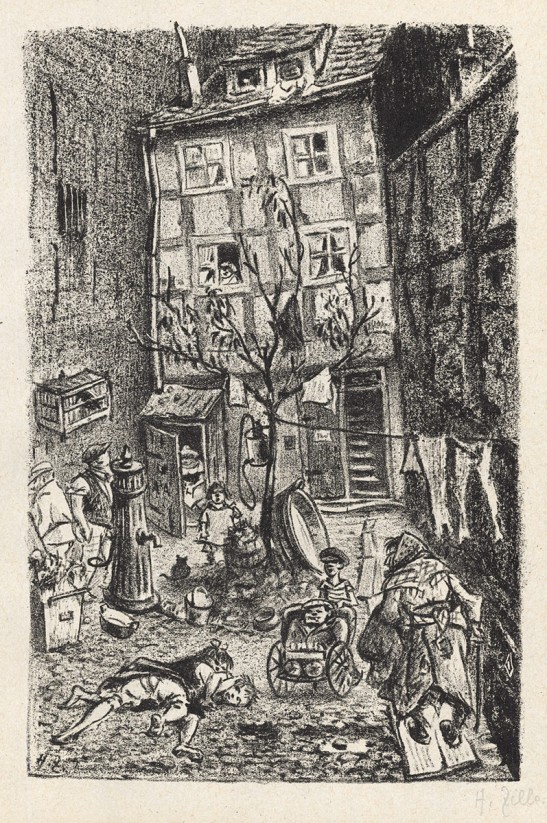 Postscript: If, like me, you’re new to Zille’s work, I should warn you that some of his output is a little, shall we say, graphic. At the least it’s not the sort of thing you probably want flashing up on your screen at work. Depending on your personal sensibilities you also may be offended. I thought I should at least warn you before you head off to search the internet.